The Netherlands is on Fire! | Need Support Now More Than Ever for This Film. 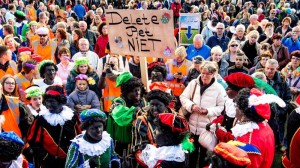 If you are unfamiliar with my project, Black Pete, Zwarte Piet: The Documentary I’m sure the images enclosed in this email have shocked you. For years, the Netherlands (the country formally known as Holland, home to Amsterdam) has presented itself as a multi-racial and liberal utopia. It is a country known for tulips, legalized marijuana and prostitution, gorgeous canals, and clogs. What is less known is that the Netherlands is also home to a very controversial and historic blackface tradition that has been celebrated for the past century. Now, with recent resistance against the tradition, white Dutch citizens are OUTRAGED and fighting back, holding on to their tradition by all means.

The Documentary:
After traveling back and forth to the Netherlands as a curator and researcher for an upcoming project about people of African descent living in Amsterdam, I learned about the work of the Zwarte Piet is Racisme (Zwarte Piet is Racist) Campaign and decided to direct and produce a documentary tackling both sides of this controversial issue. I successfully launched a Kickstarter campaign in February to support my initial production efforts. This gave the film its initial funding boost and now its time to raise more funding to continue going forward. This documentary, which is being primarily filmed in different parts of Europe, the U.S. and the Caribbean will be in the $200K to $300K range.

I am currently soliciting private investors, individuals who can invest larger sums of money in the ball park of $2.5K – $10K. More than 500 people internationally have supported the kickstarter campaign (THANK YOU!). We have received press from various outlets including Huffingtonpost. The immediate need is an additional 30K to return to the Netherlands with my production crew next month to film the bulk of the initial shoot. 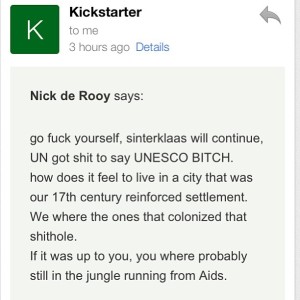 The hate mail above is not the first, it is merely the most recent. This film is indeed political activism, I am creating it not to shock or entertain, but to foster dialogue, awareness and change. Dutch citizens are up in arms that their tradition is being challenged by many Black and non-Black Dutch groups who have vocalized their disdain for the tradition and its perceived racist history.

Multiple international media outlets are covering the heated and angry response of white Dutch people to the heightened protests of frustrated citizens who want Zwarte Piet to be abolished. Over the past two weeks, there are new reports of white Dutch people dressing up in blackface on television shows and creating ad campaigns in blackface to express how they feel the tradition IS NOT racist. Also, someone posted that they should start a new tradition called “Light a Nigger on fire every year” to replace Zwarte Piet. There was a formal petition started online to re-institute slavery. On Saturday, October 26, 500 – 600 white Dutch people protested the United Nations’ decision to launch an investigation. And people are receiving death threats who are attempting to change the tradition in their local communities. So the steady stream of hate mail that I’m receiving daily, doesn’t even compare to what many longtime  activists who are against the tradition and also challenging racism in the Netherlands, are facing. This is not just a Netherlands issue. This is a global issue. Apartheid ended in South Africa because the international community put pressure on the country to institute change.

Little Known Controversional Facts about the Netherlands:
1) Last year a Dutch magazine, Jackie, published a fashion article entitled “Nigga Bitch” to teach little girls how to dress like Rhianna, the ultimate Nigga Bitch
2) A Dutch movie, called Alleen Maar Nette Mensen, about a white guy going to the ghetto to get aBlack girl with a “big ass” was a blockbuster hit and one of the most racist, offensive and demoralizing films ever made depicting Black women.
3) Currently, 2 million plus Dutch people are outraged about protests against blackface and are protesting to save the tradition in response.
4) The UN is now launching an investigation into human rights violations related to Zwarte Piet.

I’ve never produced low quality work and that certainly won’t occur now. Too much is at stake. This film HAS to be made. It takes a village.

I know this is a film that needs to surface, if you feel the same way, I am inviting you to assist me with finding these resources to bring this film forth. This is a global issue, similar to Apartheid in South Africa, only international community pressure instituted the change.

Thank you tremendously for taking the time to read this. If you need any further information or to learn more about investment opportunities, please contact me directly via email.